When a cement plant in the UK experienced increasing downtime with a dense phase conveying system, the company turned to industry specialists Kingfisher Industrial for a solution.

The main plant site is spread over a vast area, with cement manufacture on one side and storage, blending and packaging on the other side. This means that output from the mills has to be carried some 500m through a pneumatic pipeline. Originally installed to avoid an internal access road, part of the old pipeline is hidden underground and has several sharp bends.

The line carrying cement powder in a dense phase state of conveyance, weighs about 20.5t and carries cement at 28m/sec through a small radius bend. Bends inevitably give rise to hammer and distortion of pipelines over time, and the abrasive cement powder rapidly destroyed the more vulnerable areas. In a plant designed to work continuously throughout the year any unscheduled downtime was very expensive.

The underground section was particularly troublesome, making damage identification and pipe renewal difficult and time consuming. Normally the cement producer would only close the factory for two-weeks each year for maintenance, but the pipeline was so vital to continuity of production that any work necessary on this area could easily stop the plant for longer periods.

The requirement to ensure continuity of production meant that any replacement system would need to be installed with minimum disruption, be manufactured off-site and delivered as a kit of parts. In addition, elimination of the product hammer problem, significant reduction in wear rates of the pipes - with a projected 10 year service life, and improved access for inspection and maintenance, were also critical elements of the specification.

After a period of research and preliminary design, the cement company considered a number of potential suppliers, eventually selecting three companies who were invited to place competitive sealed tenders for the work.

Finally, the customer chose Kingfisher Industrial to manufacture the system in partnership with his own consulting design engineers. Kingfisher had carried out other work for the cement plant with excellent results, and its tender was a better fit to the customer’s requirements as Kingfisher totally understood the problems from past experience and knowledge of the cement manufacturing process at the facility.

The new pipeline connects a pressure vessel on the ‘wrong side’ of the main kiln building with silos on the opposite side of the road. It passes through the main building, over the kiln and out into the open air, some 15m above ground level, where it is carried on prefabricated towers and pipe bridges, which formed part of the re-routing contract, having been manufactured and erected by Kingfisher.

The cement plant engineering manager specified that installation work could proceed over several weeks, but final connection at each end, testing and commissioning would have to be undertaken and completed during the plant shutdown period planned for later in the year. With all the elements of the system (lined pipework, trestles, towers and bridges) being manufactured in Kingfisher’s new purpose- built factory in the West Midlands and delivered to site for final assembly, it was obviously extremely important that site inspection, measurements and fabrication standards were of the highest order.

“Our design partners undertook the design and structural calculations, and produced general arrangement drawings,” commented Julian Brindley, Kingfisher Industrial‘s Sales and Marketing director. “We then created the final fabrication drawings, manufactured the component parts and delivered them to site. We appointed our own engineering team, consisting of a site engineer, with our qualified riggers and fitters to undertake the erection process. As this site was in operation during the build process, and there were many vehicle movements in the area, we had to manage and monitor the movements of mobile cranes and powered access equipment, due to the risk associated with the possibility of collision. Placing 15t towers accurately on their foundations, and then assembling long lengths of complex bridges and pipe work with great precision using mobile cranes, was no easy task.”

Meticulous planning, the arrangement of notifiable long/wide loads, intermittent closure of parts of the national road network, liaison with the police and other authorities and temporary traffic diversions all added to the difficulty of the installation.

The cement works manager commented: “We are engaged in continuous volume production and cannot afford equipment failures,” he said.    “I was most impressed with the way Kingfisher designed and manufactured the prefabricated sections. On-site fitting went smoothly with regard to the quality of the installation, and Kingfisher maintained safe working practices and complied with our strict environmental standards. When we switched on the blowing system it worked perfectly first time; the hammer problems were eliminated and the pipeline gives every indication that it will perform to specifications. I’m very happy with Kingfisher and the way in which they carried out a challenging task with commendable technical competence and – most importantly, working safely, finishing on time and within budget.” 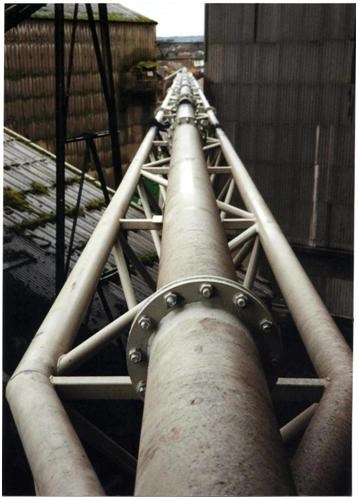